LAUREN ORCHOWSKI
LAUREN ORCHOWSKI
In astrophysics the “observable universe” is recognized as a celestial sphere containing all matter that can be presently viewed from Earth. This series of photographs explores our individual and collective relationships with astrophysical environments, the macro and micro spaces that surround them, and photographic terrain encompassing art and science. This has led me to me to consider the tangible spaces we inhabit near and amongst each other with an emphasis on the physical properties of light and how it occupies and is interpreted within vertical spaces.

For over 15 years I have documented astrophysical environments throughout North America witnessing the depletion of dark skies accompanied by an increase of political agendas threatening the scientific and environmental landscapes. I consider how our existence is paralleled by the infinitely far-reaching horizontal and vertical axes of Earth and the cosmos and use a 7” x 17” analog large format view camera and film to capture the amount of visual information necessary to convey and explore these ideas. Each image originates by exposing a sheet of 7” x 17” black and white film. It is only during the darkroom process, after hand developing the film and contact printing the negative, that I begin to understand the environment I’ve photographed as well as what has not been recorded on the negative. Ultimately it is with the application of my visual memory, chemistry, and a desire to communicate the evidence of time on a singular sheet of photographic paper that allows the past, present, and future to emerge.


The images in “North America," "closest to me," and “upstate,” are at once independent portfolios and also function together as a visual synthesis of macro and micro, public and private, narratives and spaces.

The 2019 HARIBAN AWARD selects the "The Observable Universe, Near and Far" to receive the award of Honourable Mention

Click here for the latest "The Observable Universe, Near and Far" interview. 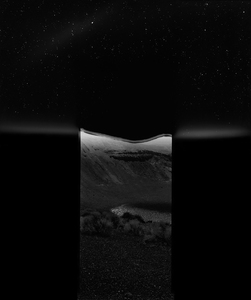 THE OBSERVABLE UNIVERSE, NEAR AND FAR, North America

THE OBSERVABLE UNIVERSE, NEAR AND FAR, upstate

THE OBSERVABLE UNIVERSE NEAR AND FAR, Closest to me

THE OBSERVABLE UNIVERSE, NEAR AND FAR, Dioramas
Presented in a completely darkened room, these dioramas combine multiple black and white analog darkroom processes with three - dimensional hand-built environments constructed of wood, mirrors, paper, paint, polymer, and various light sources. The environments are influenced by work from the ongoing two - dimensional photographic project “The Observable Universe, Near and Far, " and allow the viewer to simultaneously consider light and the absence of light as archeological artifact.
Loading...